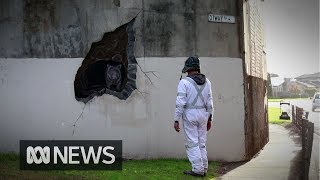 Phil Hoy: I was out the front mowing the nature strip and I could see a bit of attention on the other side of the bridge of people looking and taking photos and I thought, “Wow, there’s something going on.” So, I went and had a squiz and then once I saw what I saw, I thought “Yes, this is gutsy.” Honestly, it looked like someone had done damage to the bridge with the way it’s got the hole in it. I had no idea who’d done it. I thought, “Well, someone around here has got talent.” [music]

Jimmi Buscombe: I probably should have got permission but I thought, “I’ll just go and have an experiment. It’s only chalk, it’s going to last a couple of days. If it rains, it’ll come straight off.” I did it on a Friday. I thought, “If it’s not washed off by the Sunday, I can go down with some water and hose it off.”

Phil: Then it wasn’t until I actually touched it and realized what it was done with and then I thought, “Well, it’s going to rain and it’ll be gone.” So, yeah, it needed saving. It can’t go. [music]

Jimmi: I’d been hired by Warrnambool City Council to do a piece done in pastels and I needed to have a bit of practice. I snuck down to the bridge that’s literally at the end of my driveway outside of my house just to see how the pastels would adhere to the concrete and how they’d last. It took about three hours and people hooting on the way past. Some people were calling up and talking to me like, “Wow, I thought someone had knocked a hole in the bridge,” or “what are you doing here?” Instantly it was a lot of fun for the community. Cos I… Originally, I was going to wash it off that night, but I loved it so much I thought, “I’m just going to leave it there. It’s the weekend, let people drive past and see it, and then I’ll wash it off on a Sunday.”

Phil: My wife warned me, “Don’t interfere. Don’t go near it.”

Reporter: Did you listen to your wife?

no. I put the hi-vis on and pretended I was, you know, someone important and I knew exactly what to put on it to make it stay there and done the old [mimics spray can] three times. Oh, I had to let it dry in between coats [chuckles] , and by the time the nature strip was mowed, it was permanent … so [music]

Jimmi: Then Sunday came around and I went down there with my bucket of water and my cloth. As I walked up to it, I noticed it was shiny and I thought, “Oh my God. It looks like it’s had some chemical reaction.” It was a really dewy morning that morning. I thought maybe the pastels absorbed some of the moisture from the air. I go up and I rub it with my finger and it’s not coming off. I dip my cloth in, I’m starting to wipe and it’s just not moving.

Jimmi: I start to panic. I’m like “Oh my God, what’s going on?” Scrubbing, scrubbing, scrubbing. I decided, “All right, I’ll come back and I’ll get metho.” I came back, got a bottle of metho, ran down, same thing. It wouldn’t come off.

Phil: It’s anti-graffiti clear, yes. It’s game over there. You won’t wash it off.

Jimmi: I’m starting to panic thinking, “Oh my God. I haven’t got permission. The council don’t even know I’ve done it.” Then I came back and I found acetone which is like nail polish remover and that stuff gets everything off, and it didn’t [chuckles] even come off with nail polish remover. So then I was just stumped. I’m like “Well, what do I do? I have to leave it there and work it out.” And I decided I would contact the council and let them know what had happened. I was freaking out a lot because you can get in a lot of trouble. I mean, It’s essentially graffiti. Although it’s art, it’s graffiti.

Jimmi: My daughter goes to school locally. I took her to school and one of the moms told me a local person who lives near me had come across and sprayed it with a clear coat. I asked a couple of people around and they all pointed to across the other side of the train bridge to Mr. Phil Hoy. [background noise]

Phil: Jimmi showed up and introduced himself, and said he was the bloke who– I said, “Yes, gutsy as Jimmi. I loved it that much that I’ve preserved it. It’s there for life, mate.”

Jimmi: I lost it. I thought it was hilarious. I chatted to him for about half an hour and then it turned out that at one point in his career, he was the contractor as the graffiti removalist for Warrnambool City Council, and here he was protecting my graffiti with a clear coat. It was an automotive clear coat so nothing gets that stuff off.

Phil: Yes, wombat’s here to stay. You didn’t need to run a comp to name the wombat.

When learning English, it is very important to understand English speakers.

However it is also important to speak and communicate with people.

Check out our partner websites for more ways to study online.