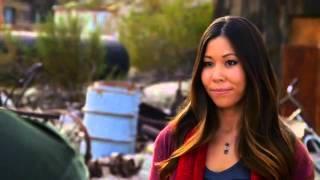 Narrator: We’re on location of a movie set in the 1950s. Complete with cameras, bossy director, and onset police for security. We’ve also invited a group of spectators to watch the film. Pay attention along with them as the crew gets the final shot of the movie. Try to remember what you see.

Crew Member 1: There we go. Final shot, everyone.

Narrator: Keep watching. Everything you see is fair game.

Narrator: Okay. That wasn’t part of the movie. Did you catch what just happened? I know, it was a lot to take in, but we’re going to let you in on a little secret. The actors, director, crew, and police are all in on it. Everyone, in fact, except our spectators. Former Las Vegas police sergeant Chris Curtis is here to test your memory. He’s going to ask you and our other witnesses three questions about what you just saw. Ready?

Sergeant Chris Curtis: What color was the car that got hit?

Narrator: Think back and try to be accurate. Got your answer?

Sergeant Curtis: Did you say blue? Good, that’s correct. Next question. How fast do you think the car was going when it bumped into the other car?

Sergeant Curtis: How fast would you say the car was going when it smashed into the other car?

Male Participant 3: It was going about 30 miles an hour.

Narrator: These people think the speed was really high. Is that what you thought, or did you think it was much lower? It turns out the actual speed was 20 miles an hour. Is that what you guessed? Why were our eyewitnesses so much higher? The thing is only some of our witnesses guessed high. Others were much closer to the real speed.

Sergeant Curtis: How fast do you think the car was going when it bumped into the other car?

Narrator: Okay. How can this guy think it’s 50-

Narrator: After all, they both saw the same crash but if you’ve been paying attention, you’d know it’s not the crash that matters, it’s the question. Listen carefully to Sergeant Curtis.

Narrator: Did you catch it? He said smashed to some witnesses-

Narrator: -and bumped to others, including you.

Sergeant Curtis: When it bumped the other car.

Narrator: The word, ‘smashed’, actually increased the speed of the red car in our spectators’ memory.

Sergeant Curtis: I want to tell you the actual speed of the accident was 20 miles an hour.

Male Participant 2: Yes, that would surprise me.

Male Participant 3: It seemed like it was 30 miles an hour.

Narrator: It’s incredible if you think about it. One word has the power to totally rewrite a memory. Don’t feel bad if you got the speed of the car wrong. We’re going to give you another chance to test your memory.

Sergeant Curtis: Final question. You saw the driver blow through a stop sign right after the accident. Yes or no?

Narrator: Before we reveal the answer, let’s see what our spectators have to say.

Sergeant Curtis: Did you see the car run through the stop sign after the accident?

Male Participant 1: Yes, I did.

Male Participant 2: Yes, I saw him go through the stop sign.

Narrator: Watch the replay. Do you agree the driver ran through a stop sign? Look closely and you can see, it’s actually a yield sign. Did Sergeant Curtis mess with your memory again? If so, you’re not alone.

Sergeant Curtis: Would it surprise you to know that it was not a stop sign but it was a yield sign?

Male Participant 2: Let’s go back and check it out. I think it was a stop sign.

Narrator: What was going on in your brain when Sergeant Curtis manipulated your memory along with our participants? Experts call it ‘the misinformation effect’ and it reveals memories are never a perfect recall of an event.

Expert: Every time you receive new information from a trustworthy source, your brain reshapes your memory based on those details.

Narrator: Memories formed under stress like a car accident are especially vulnerable to change.