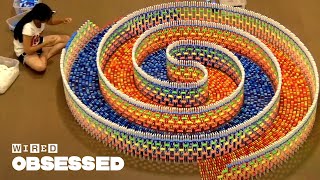 (dominoes clacking) People just like watching things fall for some reason, it’s almost hypnotizing. My name is Lily Hevesh, and I’m a domino artist, which means I set up thousands of dominoes in intricate arrangements and patterns. And then I knock them down. (dominoes clacking) Lily is the most popular domino artist on YouTube, with 2 million subscribers and half a billion views. Perfect Yes. But not everybody gets it. I get a lot of comments on YouTube, someone would be like, “domino’s, that’s not an art form, anyone can do that.” They don’t understand what goes into a domino setup.

Behind every successful project is a lot of painstaking work. Over the past decade, she’s spent thousands of hours building projects like these, [Ultra go sonic on it. (crowd cheering)] elaborate domino chains that have made fans out of celebrities, set multiple records, and earn her a massive online following. (crowd cheering) But even with all that experience, each project carries the same risk. (dominoes clacking) Oh my God. You know it’s gonna knock down at some point, and you just have to learn how to deal with that and get past and keep rebuilding keep doing it even if it fails.

She calls her favorite project, the amazing triple spiral. It took eight days and 15,000 dominoes to set up. Lily also works on teams. She was one of two leads on this massive setup, which took 19 builders 250,000 dominoes and a full week to construct. From start to finish, it fell for an astonishing 12 minutes and 39 seconds, and broke three records, including largest overall domino project in America. It’s like I’m almost in a trance When I’m building, and I like get into the zone of where I can just focus on a dominoes and create something that I think of and make it come to life.

(dominoes clacking) Some people are like very square and geometric with their lines. I’m kind of like free-form. And I, like, go all over the place with my setups. And I think that’s why people like it, because they can always be surprised by what’s gonna to come next. And dominoes aren’t the only ingredient. She also mixes in Rube-Goldberg-like tricks, which allow even more opportunities to think in three dimensions. To start a project, Lily first decides which elements to build around. So there’s a lot of names for different tricks. The most standard ones are the domino line, the domino curve, a domino field, tower, wall, pyramid, there’s a lot of tricks.

I do all the structures first. So that’s like the walls, the towers. And in case one of those towers falls by accident, it won’t knock down other things around it. And then after I do all the structures, I do all the flat projects, which is the fields, the lines, the turns, this is a direction changer. So when the clear domino hits the top of it, it’ll spin and then it’ll hit the yellow one and make it go in a 90 degree angle. And then I connect it all with a single domino line.

I think the main thing is just being calm and precise.

So there are two main ways for a project to fail. One is if the chain gets stuck, and doesn’t fall all the way through and one take. And then of course, there are accidental falls. Okay, no. Yeah, I’ve knocked it down by accident a couple times. As a domino builder, you have to learn to get through fails and just try to figure out what failed, how to improve it and get better. To avoid accidental knock downs, she uses a fail-safe technique. As I’m building I make safety gaps by taking out like five dominoes here and there.

And if I knock it down by accident, it’ll stop at that gap. So it doesn’t knock down the whole thing. Gotta be super, super careful. And especially because I’m like in the setup right now. Filling in safety gaps is probably the most stressful part of it, because if you knock it down, it could knock down the whole thing. So it’s pretty tense. After her first viral video in 2013, it became clear that this was no longer just a hobby. Domino art is my full time job currently. Right now I’m traveling around the world doing projects for companies, who want their logo done in dominoes.

I’ve done commercials and different things for ad agencies. To recreate images from pop culture or logos like this, she starts on her computer. So when I do a picture out of dominoes first I’ll find the image online, and then there’s a computer program on Microsoft Excel, where you put the image that you found online beneath the cells, and it’ll actually convert the cells into a domino pixel.

Then she prints out a step by step guide on how to recreate the image in domino form. So it’ll say like row one, three white, four black and then exactly how many dominoes to actually make the image. And then I set up cameras and I knock it down. (dominoes clacking) Lily posts a new video every Saturday, it takes up so much of her time that she’s actually decided to take a break from college to focus on her career. My YouTube channel is doing so well. I’m getting a lot of inquiries, I’m able sustain myself and I don’t really need a degree to do what I’m doing.

If I wanna go back to college in the future, I can, it’s always an option, but I already have the job that I want. (dominoes clacking) The best part for me is seeing something that I worked so hard on, work all the way through. After sometimes even spending weeks planning and building it. I finally get to see the payoff when I knock it down. And when I see that last Domino fall, that’s, like, the best part, like, that’s what I live for.

When learning English, it is very important to understand English speakers.

However it is also important to speak and communicate with people.

Check out our partner websites for more ways to study online.